If you are ever reinstalling on an ASM and you can't select your disks in the DBCA because they are already member of the diskgroup, you have to delete the label before

Found myself the solution at Burlescon

Lessons learnded part 3291: SSH error "permission denied (public key)", seems to have an obvious reason, I thought when a colleague asked me on supporting him. I explained how to generate public/private keys, how to put it to gerrit etc. Nothing worked. After 4 hours of sweat I found the error. He registered on Gerrit, was in the correct group, but had no username. It seems that the username in gerrit is NOT mandatory. However it's not possible to push via SSH without providing the user the public key should work for.

Gerrit is great! And one of the most needed plugins is the delete-project plugin, for easy deleting projects without the need to manuall delete files from the harddisk and remove rows from the underlying database. What is missing? The plugin... it is NOT prebuilt available. Why? I don't know... However I needed to compile it and so here it is for the actual Gerrit version (2.6) delete-project.2.6.jar

After a fullwipe of my phone (after playing around ;-P) I ended up with a almost bricked phone and needed to copy some files. You normally do that with adb (android debug bridge) an command line client for your (to the pc connected) phone that runs on your client. Normally you need to install the Android SDK (some hundred MBs) and do a bunch of configurations, but there seems to be a new package "android-tools-adb" currently in Debian SID. Installation was not more than download it from packages.debian.org and install it with

worked out of the box, perfectly I LOVE DEBIAN!!!

I really don't know why, but there is no macro (record/playback) component included in gedit, and if you are used to that as I am from Notepad++ it's hard not to cry if you come to source you need to reformat or change....

But there is a plugin for gnome2 that Eduardo Romero changed to work in gnome3. Here the (very few) steps you need to get this plugin working on your gnome3 desktop

You are done, have fun!

Java in Oracle Forms without Beans and Pluggable Java Components

An often discussed topic is Java in Oracle Forms. There are various sites out there that explain how to build and deal with PJCs and Beans. Rarely covered is some basic functionality Forms has builtin since it's on the web (6i). That's the Java-Importer. Basically you have the possibility to use Java not just on Client side (with PJCs and Beans) you also are able to use Java via your frmweb process on the application Server. I recently needed it - once again. I tried to complete the implementation of the CELLWRAPPER parameter in the Reports Server (see previous post). It should be enough to put the file in the REPORTS_PATH, but that DOES NOT WORK . So I tried to get the workingDirectory, and found out that the easiest way is to use the Java System Class. First import the Java Class within your Formsbuilder: This few steps created a complete PL/SQL Wrapper for the java System Class. Now it's an easy task to get the user-directory (a bit reading of the java-doc) with: Especially when using Java you need a better exception handling here's an rudimentary example of this: Have fun! Let me know if anybody needs more examples!

If you use the output format DELIMITEDDATA in Oracle Reports, that exports the report as CSV file, then sometimes you need to use a wrapper (e.g. if there are CR in a field) means output is not like

it's In Reports it's pretty easy, there is a parameter that you can set called CELLWRAPPER. With this parameter you can define which character should be used to wrap the cells. If you use double quotes (") then you get FRM-41214 Unable to run Report (when running from Forms, another error when running from rwservlet directly). I am currently working on 11g, but it seems thats something that's not fixed since 10g. So it's kind of terrible that for such a long time there is a bug that has not been fixed. Metalink Note 397279.1 describes a workaround, by using another parameter CMDFILE, basically a file that contains parameters for the reports. In this file you put in your CELLWRAPPER=" (UX) or CELLWRAPPER='"' (WIN) parameter, and call it with CMDFILE=/tmp/mycmdfile.cmd. Means you change your Url (or forms parameter lists whatever...) from to

Almost everybody who is using SSH knows Putty well. If you have multiple servers to administrate putty lacks of the feature to easily administrate these. Of course it's possible, but not very easy to use. On Windows I an using the "Putty Connection manager", a pretty nice tool thats doing the job. It has some minor bugs, is not supported anymore, but works well on any flavour of windows. After (already mentioned several times) moving to Gnome, I needed some kind of substitute and stumbled upon a incredible good piece of software called "Gnome Connection Manager". After using it for several weeks, I can say it is so simple and powerful that I just can just recommend it to everybody working on Linux. As you can see in this screenshots, you can easily define connection details, tunnels, startup commands, X11 forwarding. 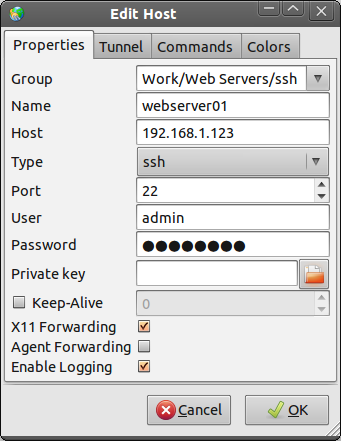 Also more advanced features, like the sending of host-commands to multiple connections is supported. 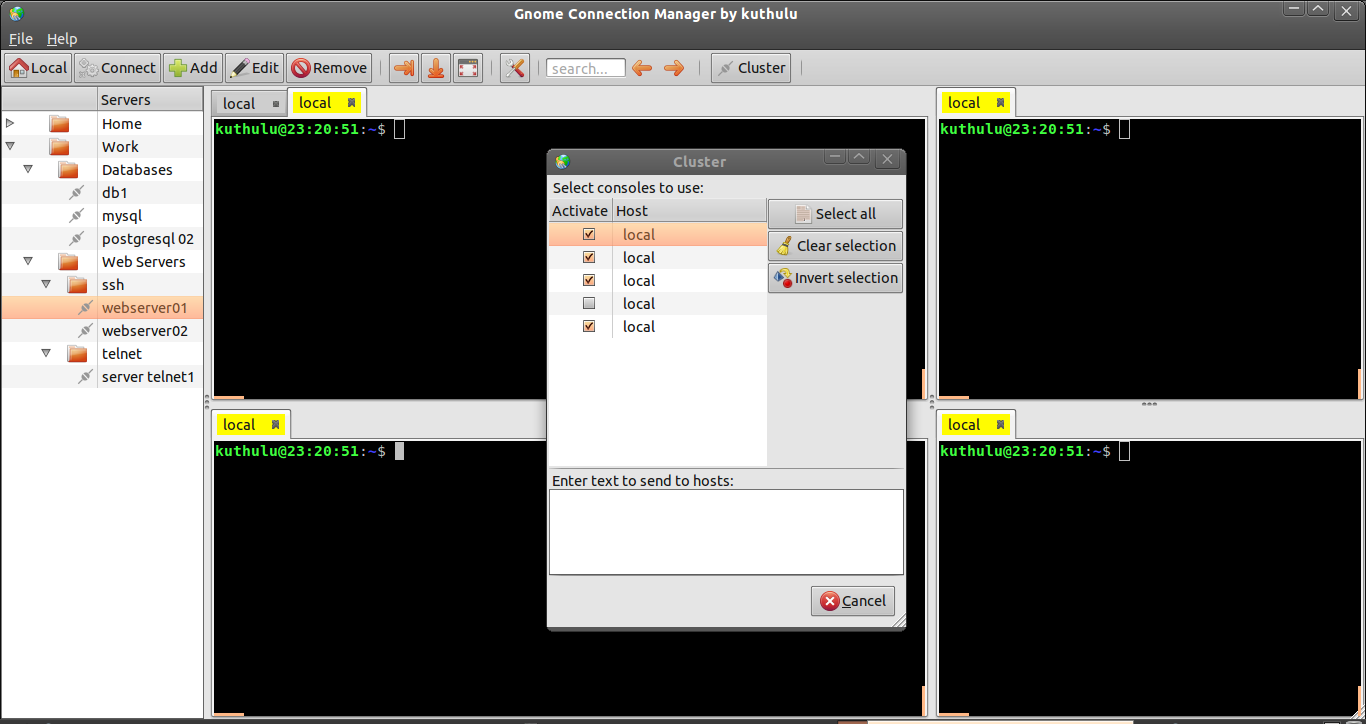 Heavily recommended, get it!!! P.S. Screenshots taken directly from kuthulu.com

Recently I needed to split a delimited string with PL/SQL. I just did not want to write the xx version of a "parse delimited string" package, and so I stumbled upon Alex Nuijtens Blog. This solution was not the least complex, but so beautiful I almost wanted to cry ;-). !Thanks for sharing your solution at this point Alex! It worked perfectly and so I implemented it in my programs. After a few more tests with larger string (~5000-10000) I noticed huge performance issues. So I did a fast check with using a "normal" loop and not the hierachic query Alex is using. Same result, terribly slow (~30s). After thinking a bit (...happens from time to time...) it was clear, normally if you parse a delimited string, you always cut the part off the front, that you parsed and put it somewhere else (collection....), what did not happen by using this solution. So I rewrote the pure SQL approach to a PL/SQL function. So The code looks now:

The complete programs needs below 0.1 seconds to finish in comparison to 30 before. So Alex program is good for small strings, but does not fit my needs in this case. Probably it's much faster if you use analytic functions, where you always replace the string of the previous line... I think if I have some time I will give that a try, because a pure SQL solution would be much more beautiful than a PL/SQL approach ;-).

I use Icedove (Thunderbird) since years, and think it's really a good piece of software, in my opinion it's much better than Outlook, I was using for several years too. After splitting up my data into "OS" and "real data", I also moved the .icedove folder from my home directory by symlink to my data-harddisk. Mails worked fine, but lightning would display any evens, you also could not even create any new calendar, events. After I while I saw the following error in the error-console:

Solutioin: my data-harddisk was mounted by fstab with rw/user (for whatever reason I did this once...), I changed it to defaults what is equal to "rw,suid,dev,exec,auto,nouser,async on my current Debian Wheezy. After rebooting, everything works fine. I really would appreciate if anybody can explain me why this was the solution to my problem.

Finally it seems to be possible to use the gnome-extension-site with Debian Wheezy. I gave some a try and it's incredible how you can enrich and customize your desktop environment for your personal taste. I begin to love Gnome 3 more every day I work with it!

I setup my Laptop with Gnome3 and was suprised that the printer was not automatically added, I know for sure that it was added automatically with earlier version... Guess that has nothing to do with gnome itself, sometimes there is some other kind of trouble. My Printer is a old multi-functional Canon (scan/print/fax) MP780 the scanning with simplescan (standard program from Gnome3) works pretty well. If you look for drivers in the Inet, there is just commercial software, like Turboprint. I tried it but had some issues after a while, and don't really want a kind os software suite just for printing... I looked further and noticed that there are free drivers called gutenprint, already available in Debian. Basically the steps you need to configure the printer were